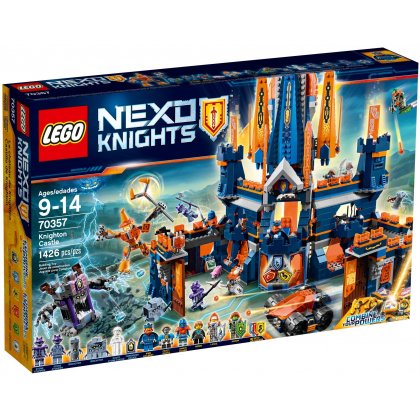 For weapons - Defend the enemy attack on the kingdom and Knighton Castle!

Visit the magnificent Knighton type "two in one" and defend the king from attack! Open the main gate and expand the walls to send Robin's vehicle to the battlefield with two launch pads and Merloka 2.0 in MechLok, a robotic armor with a wizard's hat. Attack your opponent and do not get caught in a riding stone prison. This amazing set of LEGO® NEXO KNIGHTS ™ has a tower made of detachable Rocket Racket, a residential part of the two-bedroom castle and diner, armory and command center that will provide hours of fun in the siege of the castle.

Knighton Castle has a courtyard and a living area at the back. The courtyard has a throne for King Halberd with a NEXO Power Combo Shield, two rocket launchers, a Robin vehicle with two block launchers, a minifigger with ammunition and a mine bay, MechLoka to build with moving limbs and a transparent orange wizard hat and a roving cockpit. For five minifigurek. The living area includes two bedrooms, five beds, dining room, armory, command center and two prison towers.

The riding prison has monstrous eyes, moving claws with transparent lightning, open jaw that leads to an open prison cell, flag on the mast, and two catapults.

Play the siege of the castle: Wake the knights in their beds, send them to the command center and give them the weapons from the armory. Unlatch the castle gate to open the inner courtyard and send Robin's vehicle to the fight. Place King Halberd on his throne and give orders to LEGO® NEXO KNIGHTS ™ warriors! Set the white stone statue in the castle to spy on the knights. Put five minifigures in a roving rocket and take off in the skies.

Accessories: two handles on the dial, balls of lightning, hot dog, a glass of wine, a bottle of wine and a cell.

Scan your NEXO Power Shield (Ghost Destroyer, Lisi Ghost, Crazy Pumpkin, Gamma Rays and Centaurs Charge) to create your own combinations that will give you greater capabilities in LEGO® NEXO KNIGHTS ™ and help you deal with stone monsters. Also included is the Forbidden Power Bad Melt.