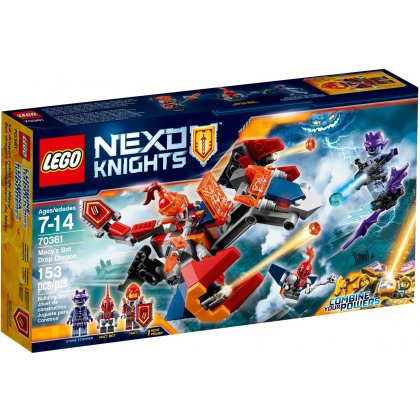 Stand up against the stone machine in the falling dragon of Macy's!

Hold the duel between the stone engine and Macy in the falling dragon to build with two wings on which the launch pads are mounted, the cockpit with minifigure, the moving tail and the macybot dropping function. Shield stone machine can be used as a flying skateboard and play an exciting duel in the air.

Dragon to build Macy has a cockpit with minifigures, a disc holder, two movable wings with block launchers and a moving tail. Drop the macybot from the belly of the dragon! Hole the club or NEXO power at the end of the dragon's tail to increase the attack power.

Weapon in the set: Macy's club, Macybota club and crossbow on the blocks of stone machine. Also included is a flying skateboard machine stone with lightning bolts.